We commissioned a simple gate from a local ironworker from one of the Caribbean islands--IW, I'll call him-- to go at the top of the stairs and prevent the intrepid kelpie Katie, now lame with spondylosis, from charging  down to intercept some threat, real or imagined, like the Fed-Ex man, and taking a misstep into oblivion. 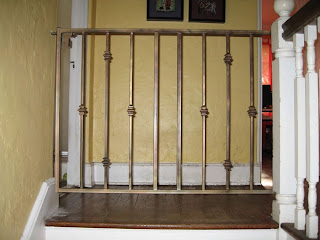 IW is not anomalous in Miami--used here in the common sense for both the city and the county.  He's a craftsman who does much of his work off the books--for cash whenever possible.  Who can blame them?

We are devolving into a Third World city.  I know the word is in disrepute, but here it fits.  The city is one of the costliest in the world and one of the richest, according to City Mayors.  But increasingly here, you're rich or poor serving the rich or middle to upper middle class doing the same.


I'd like to make the gate a metaphor for all that's fucked up in the world, but I can't.  If you open the door into a house of bedlam, you get bedlam.  If you open a door out of a house of bedlam, you get insanity loose in the world.  The gate works in terms of the opening inward and outward, but it fails because unlike a door, which provides a solid barrier between those worlds, or states, if you will, the gate is permeable, allowing much of the lunacy to cross back and forth.  The solid door keeps everything out; the gate discriminates by design.


The 1990-page healthcare reform act of the House of Representatives is the same way--neither one thing nor the other, impressive for its size; lilliputian in its execution.


There, i've done it, anyway, which at the end of the day is all one can say of healthcare reform.  .  It promises a lot.  It might make some changes. but in the ned, the world's it dividies and uites are no long our own.